Move over Halloween: 5 Reasons to Travel to Mexico for Day of the Dead

Mexico · About Culture & History
It’s the fantastical backdrop of the opening sequence of a James Bond movie. And one of the items on the list of UNESCO’s Intangible Cultural Heritage of Humanity.
Mexico’s Day of the Dead is often mistaken as the country’s equivalent of Hallowe’en, but Día de Muertos has its own history, traditions and practice in modern Mexico that make it the celebration worth planning a trip at the end of October.
Aztec + Christian Mash-up
Hallowe’en’s roots lie in ancient Celtic culture. But Day of the Dead began with Mexico’s local traditions and a festival dedicated to an Aztec goddess around the time of the fall corn harvest.
October 31st, November 1st and November 2nd. Three Christian holy days associated with death and resurrection. Hallowe’en emerged on the Christian calendar on All Hallows Eve, October 31st; and Mexico’s ancient local traditions also converged with new, Christian feast days: November 1 and 2, the Catholic All Saints’ and All Souls’ Days.
In Mexico, Day of the Dead still has spiritual significance celebrating death as part of the cycle of life, and loved ones moved on to the afterlife.
Celebrating Death…
Day of the Dead is not a single day. It’s actually a multi-day celebration where families gather to remember deceased members and provide support for their spiritual journey to the afterlife.  It is not a sad time, but a happy one, where departed loved ones ‘join’ the living for the celebration.
Mexicans build altars in their homes and visit graveyards to decorate with candles to light the way of the departed, photos and personal items, and highly fragrant orange marigolds whose strong scent was believed to draw the souls of the dead to their living relatives celebrating their memory. In some places, families picnic in the cemetery, and spend all night beside their relatives’ graves. 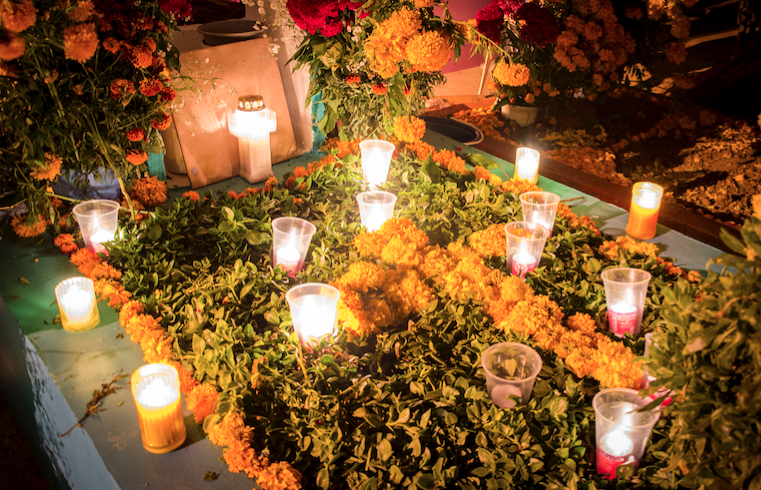 Makes you Hungry
Bread of the Dead, a sweet bread decorated with skulls, bones arranged in the circle of life, or teardrops for sorrow, skull-shaped sugar confections, and bottles of pulque (fermented agave juice) or tequila, and jars of cinnamon-flavored corn porridge all featured in Day of the Dead celebrations.
All About the Face – A Skull Face
The icon of the Day of the Dead has become ‘La Catrina’, short for La Calavera Catrina, or ‘Elegant Skull’, the image of a female skeleton dressed in historic fancy dress. La Catrina originated from an early 20th century illustration by that name of a female skeleton’s head wearing only an ultra-stylish European ladies’ hat of that era.
It was meant to be a satirical put down of the social pretensions of Mexico’s upper classes. But it took on new life as the symbol of the Day of the Dead. A quote attributed to the artist, “We are all skeletons”, says it all: underneath even fancy dress, we are all the same, and will all eventually die.
Hallowe’en has a whole cast of ghoulish characters, from ghosts to vampires and zombies and other ‘Undead’, but Mexico’s Day of the Dead is symbolized by the Elegant Skull dressed for a formal ball.
Death do us Party
They say art imitates life, but in this case, life may be imitating art. The opening scene in the James Bond film Spectre, of a spectacular Day of the Dead parade in Mexico City, actually inspired a concerted effort by local residents to make what had been a small scale, random occurrence into a grand, annual affair.
Not only has a grand parade leading up to the Day of the Dead become popularized for the local community, it’s become a tremendous tourist attraction, and gives visitors a way to participate in authentic local culture.
You’ll see couples and entire families dressed up, with ladies as La Catrina (many even finding this an excellent way to re-purpose their wedding gowns) and men in formal wear as the male equivalent, catrines.
Visitors are encouraged to don their own skull masks or makeup and historic fancy dress to participate in a revitalized and growing essential experience of Mexican culture.

By: Lynn Elmhirst, Producer/ Host, BestTrip TV
Images: Getty
Copyright BestTrip.TV/Influence Entertainment Group Inc or Rights Holder. All rights reserved. You are welcome to share this material from this page, but it may not be published, broadcast, rewritten or redistributed.